thanks for the scans!:)

Thanks a lot Chris! But please don't confuse the other members

These are not scans, but photos!

''She explains the reason why she married secretly"
Tomorrow with "REAL NEWS" newspaper!

Well I guess she wanted to have a calm and normal wedding without the media involved. Anyway looking forward to it:)

See the index in the video below:

New interview soon? Do you know what is this about? 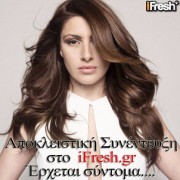 
(Sorry, I don't know how to insert the picture and text directly from Instagram)

Yes, it will be an interview!

ConstantinosHP
Can Dance The Mambo

Out tomorrow in Cyprus:

Anyone bought it so we could have a translation? Just call me a Survivor, have to be a fighter!

Anyone bought it so we could have a translation?

Well, I don't know if this is the right place to answer, but here's part of the interview: http://www.tlife.gr/Article/Elena-Papar ... 93107.html

From what I understand, she says that she wants a baby in 2016, they talk about her weight (again!), how they got to keep their marriage secret, etc.

I don't know if you'd like to know all the details, so I just wrote a very, very, very brief "summary". I don't want to make a bad translation, so maybe someone's bought it and you'll have a better answer

In this video, they talk about this interview and there's a headline where she says (just as she did in the Jenny Jenny interview) that she wants four children (four boys) so that she'll have five men at home and will "fight" to see who's gonna sleep with her

Oh, and you can also see the pictures of that photoshoot

They were talking about what has been written about her etc.

ConstantinosHP
Can Dance The Mambo

Users browsing this forum: No registered users and 2 guests